Chronic Obstructive Pulmonary Disease is a chronic lung disease that blocks airflow and make breathing difficult. COPD generally starts as mild, but progressively gets worse over time. In 2011, approximately 13.7 million people in the United States reported having COPD, according to a 2013 report in the journal Chest.

There are two main types of COPD

Chronic obstructive pulmonary disease most develops in people who are 40 years old and have history of smoking (currently smoking or in the past). Smoking contributes to up to 90% of COPD-related deaths. The other important causes of COPD include; indoor air pollution from burning of biomass such as wood in fireplaces or cooking used burning wood, exposure to duct and chemical fumes in the workplace, outdoor air pollution and long-term exposure to second-hand smoke.

The symptoms of COPD includes;

The formal diagnosis of COPD is made with spirometry (lung function test). In patient with emphysema, chest radiograph reveal a hyper inflated lungs. But, a high resolution CT thorax is specific for diagnosing emphysema. The patient functional status can be assessed by doing a six minute walking test (6MWT). Other tests include; arterial blood gas (ABG) analysis, pulse oximetry, echocardiography and blood test.

Smoking cessation continues to be the most important therapeutic intervention for COPD. International guideline has recommended cessation of smoking as the prevention of COPD. Currently, we are using the GOLD guideline for management of COPD using bronchodilators. There are two type of bronchodilators in the market; beta-agonist and anti-cholinergic. During exacerbation, patient may need to take corticosteroid and antibiotic if indicated. COPD is a chronic respiratory disease which could not be cure but it is treatable. Patients whom received appropriate treatment can have a good quality of life. 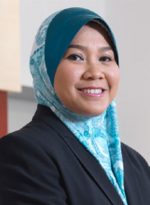