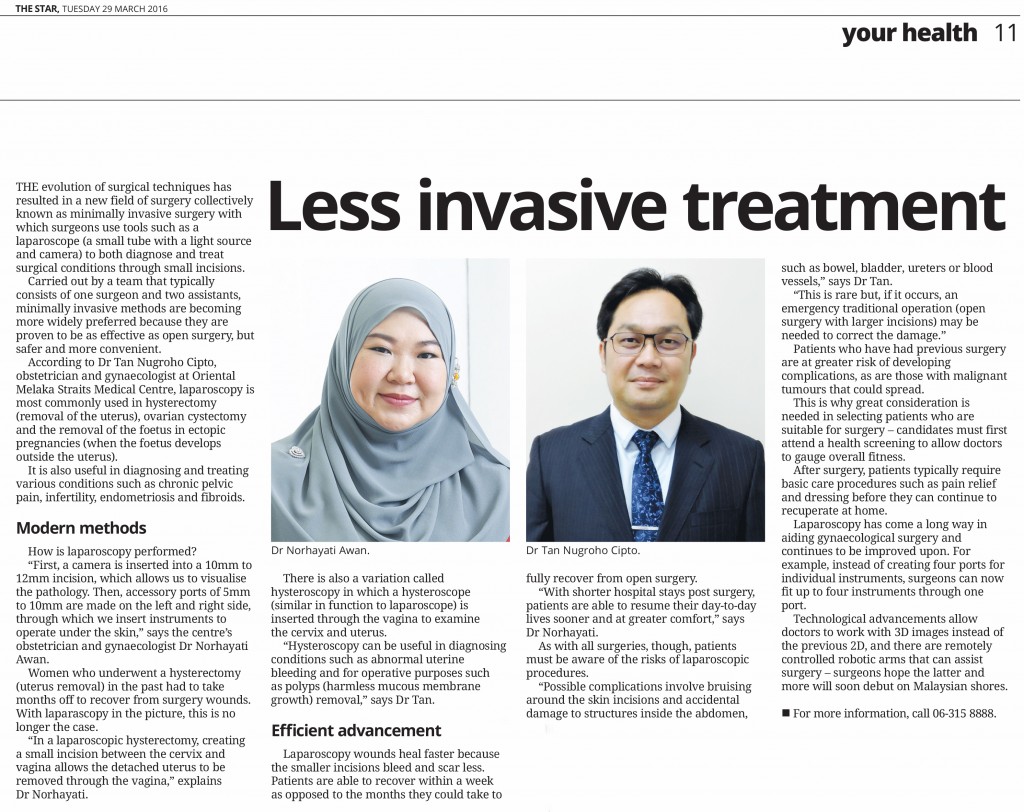 The evolution of surgical techniques has resulted in a new field of surgery collectively known as minimally invasive surgery with which surgeons use tools such as a laparoscope (a small tube with a light source and camera) to both diagnose and treat surgical conditions through small incisions. Carried out by a team that typically consists of one surgeon and two assistants, minimally invasive methods are becoming more widely preferred because they are proven to be as effective as open surgery, but safer and more convenient.

According to Dr. Tan Nugroho Cipto, Obstetrician and Gynaecologist at Oriental Melaka Straits Medical Centre, laparoscopy is most commonly used in hysterectomy (removal of the uterus), ovarian cystectomy and the removal of foetus in ectopic pregnancies (when the foetus develops outside the uterus). It is also useful in diagnosing and treating various conditions such as chronic pelvic pain, infertility, endometriosis and fibroids.

How is laparoscopy performed? “First, a camera is inserted into a 10mm to 12mm incision, which allows us to visualise the pathology. Then, accessory ports of 5mm to 10mm are made on the left and right side, through which we insert instruments to operate under the skin,” says the centre’s Obstetrician and Gynaecologist Dr. Norhayati Awan. Women who underwent a hysterectomy (uterus removal) in the past had to take months off to recover from surgery wounds. With laparascopy  in the picture, this is no longer the case.

“In a laparoscopic hysterectomy, creating a small incision between the cervix and vagina allows the detached uterus to be removed through the vagina,” explains Dr. Norhayati. There is also a variation called hysteroscopy in which a hysteroscope (similar in function to laparoscope) is inserted through the vagina to examine the cervix and uterus. “Hysteroscopy  can be useful in diagnosing conditions such as abnormal uterine bleeding and for operative purposes such as polyps (harmless mucous membrane growth) removal,” says Dr. Tan.

Laparoscopy wounds heal faster because the smaller incisions bleed and scar less. Patients are able to recover within a week as opposed to the months they could take to fully recover from open surgery. “With shorter hospital stays post surgery, patients are able to resume their day-to-day lives sooner and at greater comfort.”says Dr. Norhayati. As with all surgeries, though, patients must be aware of the risks of laparoscopic procedures.

“Possible complications involve bruising around the skin incisions and accidental damage to structures inside the abdomen, such as bowel, bladder, ureters or blood vessels,”says Dr. Tan. “This is rare but, if it occurs, an emergency traditional operation (open surgery with larger incisions) may be needed to correct the damage.”

Patients who have had previous surgery are at greater risk of developing complications, as are those with malignant tumours that could spread. This is why great considerations is needed in selecting patients who are suitable for surgery – candidates must first attend a health screening to allow doctors to gauge overall fitness.

After surgery, patients typically require basic care procedures such as pain relief and dressing before they can continue to recuperate at home. Laparoscopy has come a long way in aiding gynaecological surgery and continues to be improved upon. For example, instead of creating four ports for individual instruments, surgeons can now fit up to four instruments through one port.

Technological advancements allow doctors to work with 3D images instead of the previous 2D, and there are remotely controlled robotic arms that can assist surgery – surgeons hope the latter and more will soon debut on Malaysian shores.